In this article we will show you how to create LVM with four disks on CentOS 7 linux.
As you may know, LVM is like “dynamic partitions”, meaning that you can create/resize/delete LVM “partitions” (they’re called “Logical Volumes” in LVM-speak) from the command line while your Linux system is running: no need to reboot the system to make the kernel aware of the newly-created or resized partitions. 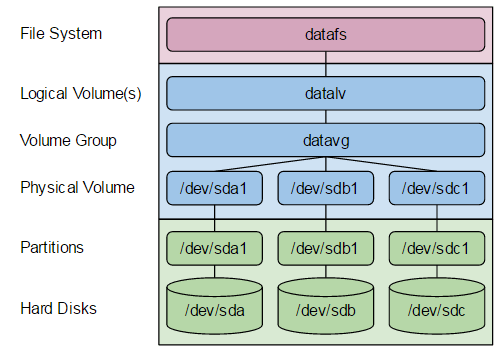 here we partition each hard drive into 1:

Physical Volume (PV): A physical volume (PV) is created using the LVM’s /sbin/pvcreate command. This utility designates an unused disk partition (or whole drive) to be used by LVM. The LVM structures, a volume label, and metadata are added to the partition during this process.

Volume Group (VG): A volume group (VG) is created using the LVM’s /sbin/vgcreate command, which adds PVs to a storage pool. This storage pool is used in turn to build various logical volumes.

Logical Volume (LV): A logical volume (LV) is created using the LVM’s /sbin/lvcreate command. This is the ﬁnal object in logical volume creation. A LV consists of storage space chunks (logical extents) from a VG pool. It can be formatted with a ﬁlesystem, mounted, and used just like a typical disk partition.

One practical usage of lvm is that you have a hosting server and have decided to separate /var or /home from your main root tree to prevent OS get stuck with fulling space. we have an article on How to move var to new partition on CentOS 7 linux.